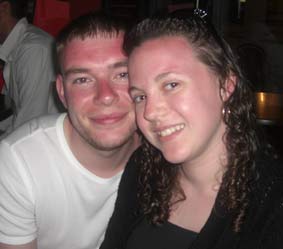 Kim Leeming lost her mother to the Von Hippel-Lindau condition (abbreviated VHL) when she was only 3 years old. At the time there wasn’t much information and not very many cases when her mother was suffering with this type of disease. Unfortunately she was only diagnosed a few months before she passed away.

VHL is a rare, genetic multi-system disorder characterised by the abnormal growth of tumors in certain parts of the body (angiomatosis). The tumors of the central nervous system are benign and are comprised of a nest of blood vessels and are called hemangioblastomas. Cysts and/or tumors (benign or cancerous) may develop and people with this condition are also at a higher risk than normal for certain types of cancer, especially kidney cancer. For more information on this condition go to website http://www.vhl.org/aboutvhl/whatis.php

Kim is extremely close to her father and had a happy upbringing while living in Woodside, Bradford. At 14 years old, Kim began to feel continuously unwell with symptoms such as nausea, headaches and light sensitivity. Even though Kim was trying to lead a normal life, she was missing a lot of school and this became an issue with both the school and her peers. Her father was informed that he would be taken to court if Kim didn’t attend more regularly and when Kim could go to school, other children would accuse her of ‘making it up’ and ‘not having anything wrong with her’.  This was made far worse when attending doctors appointments and going for hospital scans. Health professionals would not identify anything of concern and after months of these symptoms, a doctor concluded that it may be psychological and recommended she seek psychiatric help. Kim was sure the signs of VHL were showing, however felt absolutely helpless and didn’t know where to turn or what to do next.

It was while on a routine optician’s appointment in May 2002 that Kim’s life changed. The optician was so concerned about some form of pressure being exerted on the back of Kim’s eyes; he immediately referred her to Bradford Royal Infirmary.  After an examination the consultant informed her that an operation will be undertaken with immediate effect to relieve pressure from her brain. At this time, Kim had concerns for her own life and decided only to see her father and nobody else. This decision was made as she wanted everyone else to remember her in a positive way and not see her in pain at hospital.

After 12 hours in the operating theatre, Kim woke up in a hospital bed and the consultant informed her that she was fortunate to be still alive or not paralysed due to him identifying and removing a large tumor in the back of her head, just above the nervous system. The tumor had grown unusually rapidly, from the size of a pin head to the size of a golf ball in less than six months.

Following a long recovery, screening was now undertaken every 3 months rather than on an annual basis.

In October 2004 at one of Kim’s screenings, it was identified that she had a further tumor on her Kidney and would require another operation. She was admitted to St James Hospital in Leeds and they removed half of her Kidney where the tumor was attached. It was only at this point that her suspicion of having VHL was confirmed by blood tests.

Unfortunately, she started having fits and was diagnosed with epilepsy due to scarring from the first operation on her brain. At this time, Kim was determined not to let this set her back and affect her life anymore than it should and began to get her life back to some normality by meeting up on a regular basis with friends and family. It was at this point she met Jason through mutual friends and started to form a relationship. Everything in the relationship went so well that they married on 1st November 2006, Kim aged 19 years and Jason aged 22.

In October 2007, after a routine screening she was informed that she required another operation on the remaining half of her Kidney due to a small cyst forming. Unfortunately, the cyst turned out to be a cancerous tumor and the remaining part of her kidney was removed. Jason finished work to look after Kim and naturally became her full time carer.

The couple rarely went out anywhere due to Kim’s circumstances and limited finances, however on occasion they would have an odd game of bowling and attend Bradford Bulls rugby league games at Odsal Stadium. It was at a Bulls game that Jason met John (Young Heroes employee) and kept in regular contact.

After learning their background and current situation, John believed that Kim was an ideal candidate for a ‘Young Heroes’ respite break experience. After submitting her case to the review panel it was decided to investigate further. Her various doctors and specialist consultants at St James Hospital agreed that this type of care and support in a wonderful environment such as Lanzarote would be ideal for Kim and Jason.

The charity was planning for Kim and Jason to go on a respite break in April 2008, however before this could happen, there was another doctor to get authorisation from and this was due to Kim being 4 weeks pregnant.

As planned, they both went on a respite break to Playa Blanca, Lanzarote in the Canary Islands. It was Kim’s first experience of going abroad and only Jason’s second time in another country. Kim stated “at the time we were having a really bad period in life and the break away with Young Heroes was a great relief”. Jason commented “it was the best place I’ve been to in my life and hope we can return in the future”.

Kim also said ‘I’m always feel cold and need the fire on full back home and it was wonderful to be somewhere that makes me feel warm the majority of the time’.

Shortly after returning back home Kim discovered she was in fact having twins and although she was extremely happy about this news, she also realised that her living arrangements would have to change once the babies arrived. Her father’s house didn’t have enough room and in August 2008, the couple began renting a two bedroom property in Wibsey Village, Bradford.

Due to Kim’s medical condition she was advised to see a consultant every week and also had to undertake a scan every month to make sure the babies were well.  As a precaution, the consultant decided that Kim would have a cesarean section at 34 weeks into her pregnancy.

The big day had arrived; Kim and Jason recalled how it didn’t go exactly to plan. “When we arrived to St James Hospital in Leeds, we were told that there weren’t enough beds even though Kim was a priority and it was booked in early. A nurse informed me that due to being a priority case, I was going to be transferred to Sheffield and then told I was going to Manchester and then Newcastle and then Hull and finally after waiting 9 hours in Leeds, I was transferred by ambulance to Diana Princess of Wales Hospital in Grimsby. When I arrived I was told the Cesarean would take place the following day even though I was now in serious pain due to the babies being in breach. On the next day 9th October 2008, everything went smoothly from beginning to end”. Jennie Louise Leeming was born at 11.20am, weighing 4lb 11oz and Donna Bridget Leeming was born at 11.21am, weighing 3lb 10oz. 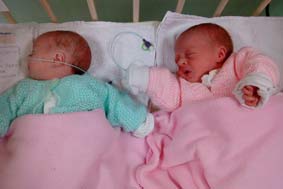 The babies stayed in hospital under close observation for 4 days and then transferred to Calderdale Royal Hospital (Halifax) to be close enough for Kim and Jason to visit them every day. Both babies came home on the 25th October 2008 and the whole family is doing extremely well.

Kim has recently been informed that her remaining Kidney has got a growth on it and will require an operation. This could mean her only remaining Kidney being removed and then require a transplant. Her father is in the process of finding out whether he is a donor match.

Kim stated “I feel fine at the moment and my priority is the babies and to ensure they have the best upbringing me and Jay can give them”.