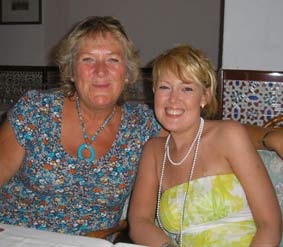 19 year old Kerry is a beautiful and inspiring young woman, who at just 14 years old was diagnosed with Acute Lymphoblastic Leukaemia (ALL), a fast growing cancer of the white blood cells which accounts for about 75 to 80 percent of the childhood leukemia’s.

Kerry spent the next 2 years of her life battling the cancer with such a strong determination, enduring months of intensive chemotherapy and spending countless days in hospital, dealing with both the physical and emotional side effects that accompanied her treatments including fatigue, sickness and probably the most poignant physical effect of chemotherapy; coming to terms with hair loss.

Kerry’s illness had such a huge impact on the family, emotionally and financially and saw Kerry’s mum having to give up work to care for her daughter.

In September 2006, Kerry and her family received the news they had been waiting so long to hear, Kerry was given the 5 year all clear.

Her family and friends who had supported her with love and encouragement throughout her illness were delighted and relieved by the news, but no one more so than Kerry herself; finally she could start to feel like a normal teenager again. However joy soon turned to devastation when the Leukemia returned a few months later, resulting in yet another grueling 4 months of chemotherapy and radiotherapy.

Shortly after it was decided that Kerry’s only chance of surviving was through a stem cell transplant.  Kerry’s younger brother Jamie was luckily a perfect match as a donor, which isn’t always the case in siblings and the transplant went ahead in May 2007. Although there were a few complications overall it was a success and slowly life is starting to return to normal for Kerry and her family.