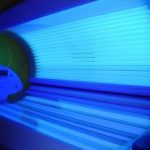 Under- 18’s in England and Wales could be banned from using sunbeds as rates of skin cancer continue to rise. The government-backed proposal was announced last week and follows the Scottish ban which came into effect last year.

The plan’s were welcomed by Cancer Research UK who recently announced alarming figures showing that people who first use a sunbed under the age of 35 increase their risk of developing skin cancer by 75%.

Using sunbeds is known to increase the risk of developing malignant melanoma, a potentially fatal form of skin cancer which kills more than 2,000 people a year in the UK.  Cancer Research also suggested that overall more than 250,000 children were risking their health in search of a tan, and were driven mainly by peer pressure.

Increased risk in North of England

Six per cent of 11- to 17-year-olds in England admit to having used sunbeds, research shows, but the practice is much more popular in the North of England, where average usage by that age group is 11 per cent, than in the Midlands and the South (4.2 per cent).

The study carried out in six cities found that 20 per cent of children in Liverpool had used sunbeds. In Sunderland the figure was 18 per cent.

Results showed that up to 8% of 11–12 year olds had used sunbeds in the past year, with some children visiting tanning shops regularly after school up to four times a week.

Further investigations also revealed that Children from poorer backgrounds are more likely to use sunbeds than those from more affluent families.

It was revealed the highest concentration of sunbed shops were found in urban areas in the North West and North East of England.