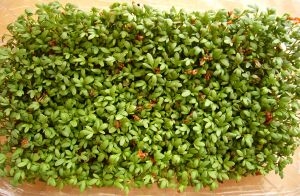 Watercress is often placed to the side of a plate as a decorative garnish, but it has been revered for its health properties for centuries.

The father of medicine, Hippocrates, is believed to have located his first hospital close to a freshwater stream to have a ready supply of the plant, while 17th Century herbalist Culpeper claimed it could cleanse the blood. It was used to ‘cure’ ailments such as baldness, hiccups and even freckles.

While these health claims may be debatable, watercress is packed with 15 essential vitamins and minerals. Now, scientists believe a daily dose may help combat breast cancer.

Last year, researchers at Southampton University discovered that within hours of eating 3oz of watercress a day – about a full cereal bowl – a small group of breast cancer survivors had a higher level of cancer-fighting molecules in their blood.

They also found watercress helps ‘turn off’ the signals that cancer cells send out asking the body for more blood and oxygen.

Professor Graham Packham, who led the research, said: ‘I was surprised that eating one portion produced significant levels of this compound in the blood. It has the potential to have the same effect with other cancers.’

In fact, this is not the first time watercress – whose Latin name means ‘nose-twister’ – has been found to combat cancer.

In 2007, Irish scientists revealed that a daily portion reduced DNA damage to blood cells, considered an important trigger in the development of cancer.

The trial involved 60 healthy men and women who ate 3oz of fresh watercress every day for eight weeks. They found that in addition to reducing DNA damage, the cress also increased the ability of cells to resist damage from free radicals.

But its cancer-preventative properties are not the only benefit. ‘Watercress is full of nutrients including iron, calcium and Vitamin A and C,’ says dietician Katie Peck. ‘It is low in sodium and high in water, so it is very low in calories.’

It is an excellent source of natural phytonutrients, substances in plants that have antioxidant properties such as isothiocyanates, flavonoids and carotenoids.

It also contains folate, which helps maintain normal blood levels of homocysteine (high levels are associated with an increased coronary heart disease risk) as well as decreasing the risk of neural tube defects such as spina bifida.

Consultant dietician Sian Porter says: ‘Watercress also contains lutein, a carotenoid which is a plant component that provides the deep orange, yellow and red colours in fruit and vegetables. They have a role in helping to stay healthy and keep heart disease, cancer and macular degeneration at bay.’