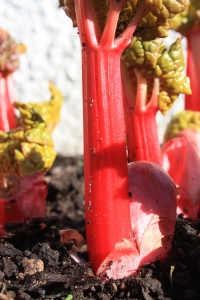 Researchers have found that the traditional family favourite, like many red vegetables, contains cancer killing chemicals.  More surprising baking the plant for 20 minutes – like in a crumble or pie – dramatically increases their concentration.

Now it is hoped that extracting the substances from the plant could come up with new drug treatments for cancers such as leukaemia.

The findings showed the chemicals, called polyphenols, could kill or prevent the growth of cancer cells and could be used to develop new, less toxic, treatments for the disease.

It could even be used in cases where cancers had proved resistant to other treatments.

The study, by Sheffield Hallam University, is the first time the benefits of British garden rhubarb, specifically a variety grown in south Yorkshire, have been studied.  Previous research focused on Oriental medicinal rhubarb, which has been recognised for its health benefits and used in traditional Chinese medicine for thousands of years.

Dr Nikki Jordan-Mahy, of Sheffield Hallam University’s biomedical research centre, said: “Our research has shown that British rhubarb is a potential source of chemicals that may be used to develop new anti-cancerous drugs.

“Rhubarb has been shown to have some very interesting polyphenols that have anti-cancerous properties. Eating a nice crumble will be good for you.

“But if we can extract the polyphenols they may be useful in helping to fight cancer along with chemotherapy.

“Current treatments are not effective in all cancers and resistance is a common problem as is toxicity.

“Cancer affects one in three individuals in the UK, so it’s very important to discover novel, less toxic, treatments, which can overcome resistance.”

The research, jointly carried out by the Scottish Crop Research Institute, is published in the journal Food Chemistry.