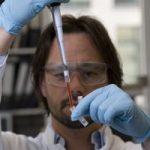 A new treatment increases survival to almost 70 per cent for children whose acute lymphoblastic leukaemia (ALL) returns, according to the results of a trial published online.

The results of the trial – funded by Cancer Research UK and Leukaemia & Lymphoma Research2 – were so promising that now all children with relapsed ALL are being offered the trial drug Mitoxantrone.

Two hundred and sixteen children across the UK, Australia and New Zealand took part in the trial, 111 were given the standard treatment Idarubicin and 105 were given Mitoxantrone.

After three years, 69 per cent of children given Mitoxantrone had survived the disease, compared to 45 per cent of those given Idarubicin.

Professor Vaskar Saha, a Cancer Research UK paediatric oncologist based at the Paterson Institute in Manchester, said: “These striking results show just what a powerful drug Mitoxantrone is in treating children whose leukaemia has returned, offering hope to many families across the country.

The significant increase in survival seen in this trial has resulted in Mitoxantrone being offered to all children with relapsed ALL since 2008. As well as improving survival, children given Mitoxantrone also experienced fewer side effects.

Over the last 30 years the number of children who have survived ALL has risen from 50 to over 80 per cent but similar improvements have not been seen in children whose cancer returns. It remains the leading cause of cancer death in children and survival for children whose leukaemia returns had until now remained constant at around 50 per cent.

Professor Saha added: “As a result of this trial, Mitoxantrone is now the standard treatment for relapsed ALL, and is having a significant impact on the number of children who beat the disease worldwide. This is the first time that a trial in ALL has been stopped so early after one drug had such clear benefits for patients.”