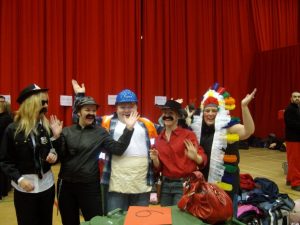 Whilst the majority of us sat cosily watching tv and eating left over turkey on Boxing Day, a group of very brave fundraisers took to the freezing waters of the North Sea in what has become a famous and 35 year tradition in Sunderland.

Donna Binyon, Emma Swainston, Stephanie Stubbs and Claire Edmonds all from Sunderland, chose Young Heroes as their nominated charity for 2009 raising a fantastic £600 to date.  The girls, who are no strangers to the local tradition, have all previously done ‘the dip’ successfully raising money for MacMillan Cancer Care so Young Heroes feel particularly privileged to have been selected for their 2009 dip.

Battered by snow blizzards, icey waters and plummeting temperatures, conditions were particularly gruelling on boxing day however it didn’t stop the hundreds of revellers, young and old racing into the freezing sea, neither did it stop Donna and the rest of the girls who were humorously dressed as the The Village People.

Whilst Donna and the team didn’t need to do any preparation or training for the event, they, along with all the other participants came face to face with local firemen who hosed them down with cold water to prepare their bodies for the sub zero water temperate.

Once hosed down the girls bravely ran into the awaiting sea for a couple of minutes.  With surrounding groups splashing and jumping in the water it wasn’t long before the girls were totally soaked and subsequently began to feel the effects of the icey temperates.  Crowds lined the beach shouting their support and cheering everybody on, while emergency services were on stand by for possible incidents.

Finally the Village People made their way back to shore where they dried off and warmed up with much welcomed hot drinks and mince pies and later that morning all participants were presented with a certificate for their achievement.

On behalf of Young Heroes I would also like to congratulate the girls for their brave achievement and thank them for choosing our charity to raise money for.