Introduction from our editor

Welcome to our Christmas edition of the Make a Big Difference newsletter.

Firstly Impact would like thank everyone for your most valuable feedback regarding the new Make a Big Difference website and the newsletter.  It is very much appreciated and we continue to welcome your thoughts.

We invite you to take another look at the website where you will notice several changes that have been made in response to discussions and the suggestions received.

We feel that the new design and subtle colour scheme is more suitable as it reflects the sensitivity of the work that we do.  For the christmas period we have also introduced a themed banner at the top of the site to fit the season.

We hope you enjoy looking though the website and this special Christmas edition of the newsletter.

May I take this opportunity on behalf of myself and everyone at Impact to wish you a very Happy Christmas and a prosperous New Year. 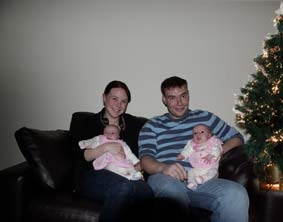 Impact Young Heroes would like to congratulate Kim and Jason Leeming on the birth of their twin baby girls. At 11:20am, 9th October 2008 Jennie Louise was born weighing 4 lb 11oz and Donna Bridget was born a minute later weighing 3lb 10oz.

Kim lives with Von Hippel Lindau Disease (VHL) which is a rare genetic condition that causes tumours to form throughout the body. Kim and her husband and full time carer Jason enjoyed a Young Heroes respite break earlier this year.

Kim said “At the time we where having a really bad period in life and the break away with Young Heroes was a great relief” Jason also commented “It was the best place I’ve been to in my life and hope we can return in the future.” 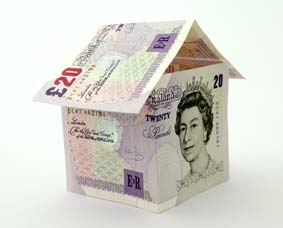 In light of the current economic situation, Impact has also had to tighten its belt by moving out of its Cleckheaton head office where they had been based since November 2004.

The move was planned and implemented in anticipation of charities like Impact, needing to cut costs where possible to accommodate possible changes within donations, backing up a recent report from the Charities Commission which revealed that one in four charities have suffered a fall in donations in the last year as the credit crunch bites.

By moving out of the Cleckheaton base, Impact will be saving a considerable amount every year, dramatically cutting back on rental expenses and utility bills, which have risen in recent months.  The reduction in such overheads will directly benefit the young people Impact currently support and will mean they can help even more young people.

“one in four charities have suffered a fall in donations in the last year as the credit crunch bites”.

The Charity Commission for England and Wales.

CEO of Impact Nigel Delaney said: “As a charitable organisation with an objective of supporting young people, we always strive to be as efficient and cost-effective as possible and our move from the Cleckheaton office will certainly make a considerable difference”.

Employees and volunteers, who were based at Cleckheaton, have been relocated to either the Park Road office in Bradford or the Manchester office at The Angel.
The Angel is a vibrant Healthy Living Centre focusing on health and well being of people living in Manchester and Salford.  Organisations such as Mind, Trinity NHS Medical Centre and Salford Carers Centre all occupy offices or surgeries within The Angel.

Since the start of the credit crunch back in early 2008, Impact has seen an increase in demand for its services which clearly carries an increase in costs. This is why it is so crucial that individuals and businesses continue with charitable donations to allow Impact to continue to support these vulnerable young people.

A real sense of Christmas spirit was very evident at the first of 3 Christmas celebrations held for Impact tenants on Friday, 28th November. 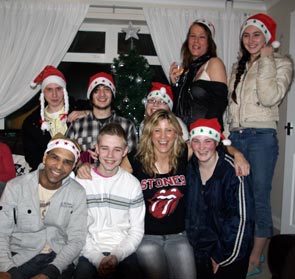 Tenants and staff attended the fun filled evening, which included a fabulous buffet and music. It was held at one of Impacts support workers’ house which had been beautifully and most festively decorated for the occasion. 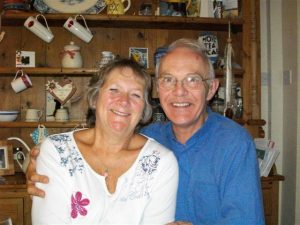 Robert and Bev Law have been involved with Impact since 2007.  Bev is a Health Support Coordinator and her husband Rob is a volunteer, supporting Bev in the developing work for the charity.  They have just recently returned from Lanzarote where they have spent the last 3 months supporting young people with life threatening illnesses suitable for respite holidays.

Here we talk to them about their roles, their best moments and thoughts on the new website.

Their roles within Young Heroes

We feel so privileged to be able to carry out the work we have been assigned to do, whether it is my role as a Heath Support Coordinator, using my nursing knowledge, or for Robert as an invaluable volunteer using all his skills as a retired parish Priest and Hospital Chaplain.

We are grateful for the opportunity to be a advocate on behalf of all young people with cancer, by raising awareness of the difficulties faced when suffering a life threatening illness at a very significant stage in their lives.

We do this by offering presentations, through fundraising activities and generally informing people whom we come into contact with in everyday life.

Working in the Young Heroes Team enables us to do something positive for young people with cancer. We are privileged to be able to arrange their holidays from referral, through to supporting them in Lanzarote, ensuring that they have a memorable holiday with their family and friends.  Fortunately, it doesn’t end after the holiday as we are able to maintain contact and continue to provide support and friendship.

We are excited about the launch of the new website, as we are aware of the work that has been involved in its production, not only by staff but the Young Heroes themselves. The charity has much to thank the Young Heroes for, as it is through them sharing their personal experiences with us, which have enabled the charity to reach out to promote the charity, but more importantly awareness of cancer in this age group.

There are so many but we would have to say our biggest joy is at the airport when we welcome our guests.  It’s often the first major thing they have achieved since becoming ill.

We watch the Young Heroes achieve new goals and challenges as they break away from hospitals and treatments for a short while, going home refreshed and fulfilled and strengthened to face whatever lies ahead. Their carer’s, also have time to relax and the freedom to renew themselves.

The only downside is when we say ‘goodbye’ at the airport!! 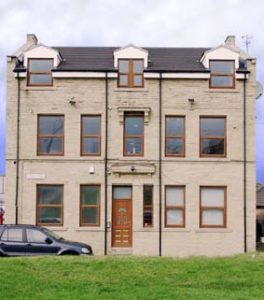 Due to a massive increase in demand for our services, Impact has been working tirelessly over the past six months to acquire more accommodation. We are pleased to announce that in time for Christmas we have created seven new homes for some vulnerable young families from Bradford.

Its one of the most prestigious and exciting marathons in the world.
Thousands of people take to the streets of London each year, many in fancy dress, raising money for charities close to their hearts.

Cheered on by over a million spectators and televised in over 150 countries…..

Yes, the London Marathon is the ultimate challenge: a 26.2-mile run that tests endurance, and gives you a fantastic sense of achievement as you cross the finish line.

Last Spring, David Wright of Denny Wright & Associates Dental Centre ran the London Marathon on behalf of Young Heroes, completing the challenge in an impressive 3hr 42min and raising over £1000 for the charity.

David is a keen runner and also a member of the Halifax Harriers, a long standing Athletic club in West Yorkshire.

Young Heroes are most grateful to David for his dedication and hard work and for raising such fantastic amount and a big thank you to all the people who sponsored and supported him.

Do you have a place in the 2009 Flora London Marathon?

At Impact we are always looking for those inspiring individuals who have their own place in this event and want to raise money for a good cause.

By running the Flora London Marathon for Impact you will be making a big difference to the lives of vulnerable young people especially those affected by cancer. 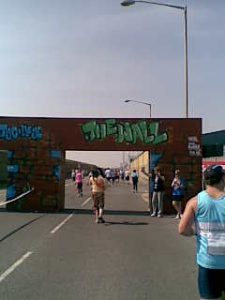